Close, but Outside: Unregulated Arab Settlements in Northern Israel

Arab settlement during the Ottoman Era in the Galilee region featured a model of agricultural farming in which a single family living alone on one farm provided for itself, fulfilling all of its economic needs through field crops and shepherding sheep. These one-family farms gradually developed into centers in which extended families with a number … read more

In May 2019, the Southern District Planning and Building Committee approved the plan for the “Ramat Beka Special Industrial Area.” The purpose of the plan is to build a complex in Ramat Beka, and transfer the Israel Military Industries factories from the Sharon area to this new complex in the Negev. The site will cover … read more

Wadi Naam: Cancel the plan which will force us to move against our will

Press Release High Court to hear a petition by residents of the unrecognized village Wadi Naam against the planning authorities: Cancel the plan which will force us to move to the town of Segev Shalom and change our way of life against our will This Thursday, 16.4.2015, at 10:30, the High Court will hear a … read more 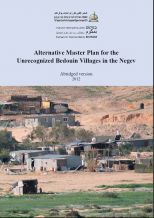 Background: There are some 200,000 Bedouin living in the Negev. About half of this population lives in seven townships. The other half lives in 46 villages, of which 11 have been recognized by the State. The remaining population lives in 35 unrecognized villages–approximately 60-70,000 people. The indigenous Bedouin population of the Negev is among the … read more