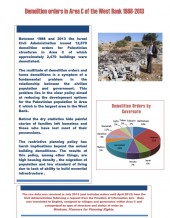 The root cause of home demolitions and displacement in Area C is inadequate plans or the absence of plans altogether and is therefore, a major source of friction and conflict between the Israeli authorities and the Palestinian population in the West Bank. See our Demolition Orders Fact Sheet.

In Area C, the planning authority rests exclusively with the CA. This means the CA has total authority over plans which regulate the construction and rehabilitation of infrastructure (e.g. water cisterns, wells, sewage and water treatment/purification plants, waste disposal sites, electricity utilities and roads), public buildings (e.g. schools, medical clinics), as well as houses and other structures (e.g. agricultural sheds, greenhouses). While the Israeli settlement’s municipalities, in most cases, have the authority to issue building permits on the basis of the plans within their areas of jurisdiction, the situation for the Palestinian residents is completely different: only the CA is authorized to issue building permits for them.[1] Given the lack of appropriate plans, thousands of Palestinian residents cannot apply for building permits and are therefore compelled to build their homes without a permit.

In addition to the acute housing distress of the Palestinian population, the vast majority of Palestinian villages in Area C are denied access to basic utilities and vital infrastructure as a result of the CA’s refusal to issue building permits. In many cases, Palestinian residents and villages have been compelled to construct utilities without permits, in order to meet their most basic needs. These installations are subsequently demolished by the CA or remain under threat of demolition, As a consequence, most of the Palestinian residents of Area C have no regular access to water, electricity, sewage and roads, and there is a distinct lack of public services such as schools, health clinics or employment zones. Even the construction of agricultural infrastructure is prohibited in most cases by the CA.