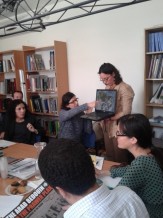 Bimkom-Planners for Planning Rights along with the Association for Civil Rights in Israel and Adalah-The Legal Center for Arab Minority Rights in Israel held a joint briefing about the recent approval of MK Benny Begin’s recommendations on the Prawer Plan. The draft bill is only a slight revision to the previous bill which accompanied the recommendations of the Prawer Committee.

The Prawer Plan seeks to transfer some 40,000 Bedouin from their unrecognized villages. Begin’s report recommends concentrating the Bedouin to an area of about 25,000 acres of which much of the land cannot be developed due to zoning and other reasons. The bill, if passed by the Knesset, would not recognize any of the existing unrecognized villages; on the contrary, it would remove all 35 unrecognized Bedouin villages to this new location, with very serious social, cultural and economic consequences for the people who live there.

At the briefing, Bimkom’s Nili Baruch, Coordinator for Programming in the Bedouin Negev, explained that this draft is essentially no better or worse than the Prawer Plan or any other plan which seeks to move the Bedouin to a densely concentrated area.

Further discussed at the briefing was the Commission’s proclaimed objective: to “facilitate the development of the Negev for the benefit of its inhabitants.” The Commission purports to seek an infusion of new funding for education and improvement of the job market while in fact the money promised is not new it’s simply money which has not yet been used.

When the Commission asserts that the objective of the State is to improve the education and advance the opportunities of Bedouin children if their parents move to urban areas, they imply that adequate education is conditional.

The report further stresses the economic opportunities which will avail themselves to the Bedouin if they agree to move to urban areas while in fact the Bedouin townships are among the poorest and least developed in the country.

At the briefing Nili described the Alternative Master Plan for all the Unrecognized Villages in the Negev (AMP) which Bimkom drafted together with the Regional Council for Unrecognized Villages and Sidre, a Bedouin women’s empowerment organization. The AMP demonstrates the viability of the unrecognized villages as independent localities with sound planning logic including residential, public and agricultural areas. Furthermore, the AMP demonstrates true public participation, in stark contrast to the new recommendations.

In terms of next steps, Nili said that the Begin recommendations will likely face an up-hill battle in the Knesset. The right-wing has panned the plan as giving away too much to the Bedouin while the left sees it as a policy of segregation and discrimination.

While we wait to see how this newest attempt to ‘solve the Bedouin issue’ plays out, Bimkom continues to work in the unrecognized Bedouin villages. Nili said, “We will continue to advocate for recognition of these villages and for access to planning rights including access to education, employment opportunities and infrastructure. We will examine the need for legal intervention and we will continue to raise public awareness.”