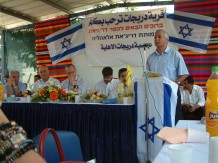 The village of Darejat was established over 200 years ago when its residents purchased the land from local Bedouins in the area. Darejat is a thriving Arab community with almost no unemployment. Most of the residents work in agriculture or are self-employed. The village includes an elementary school, medical clinic, “mother and baby” clinic, and a community center run by and for the local residents. The center runs informal activities such as enrichment courses, after-school programs, parent-teacher committees, youth volunteer programs, distribution of water supplies, and other activities.

However, instead of officially recognizing the village, the planning authorities decided to establish a new town in the area, Mar’it, which threatened to swallow Darejat and change its character irrevocably.

In response, the residents filed an objection with the assistance of  the Association for Civil Rights in Israel (ACRI) and Bimkom’s assistance. The objection exemplified the fact  that the village, just like dozens of Jewish communities in the area, had all the necessary means to exist as an independent entity.

Eventually, the Planning Committee acquiesced and gave Darejat the recognition they deserve. This was the first time that the planning authorities officially recognized a village in the Negev for the benefit of its Arab residents. The Planning Committee decided that the outline plan for Ma’rit will be divided into two villages, so that the village of Darejat will be planned as an independent village community, within the framework of the Regional Council of Abu Basma.

Return to the Negev Bedouin