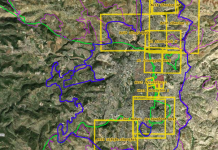 Following the de facto annexation of East Jerusalem, the State of Israel gradually expropriated roughly a third of the annexed land. On the expropriated areas, new neighborhood-settlements were built. The expropriation maps were referenced in official documents but were not fully available to the general public. As a result, information was obtained only partially and in response to queries regarding specific locations. In 2018, following legal proceedings, Bimkom – Planners for Planning Rights, received copies of the expropriation maps from the Israel Land Authority. . You can see the full map here.