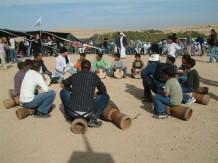 In 2003, Kasr el-Ser, a Bedouin village in the Negev gained recognition from the Israeli government and became a part of the Abu Basma Regional Council. As such, the village has a statutory outline plan for its entirety, not no detailed plans, and therefore the village remains without connection to electricity or water, sewerage or proper roads.

Through the Bimkom project entitled, Promoting adequate planning and development of the recognized Bedouin villages in the Israeli Negev, Bimkom worked with residents in Kasr el-Ser to create a detailed plan for three neighborhoods was completed to the satisfaction of all parties. This plan has now been submitted for public review and objections.

The plan provides a successful example of community input in planning, and attempts to overcome many of the planning barriers which to date have blocked development in Kasr el-Ser and other villages. In particular, the plan is based on family compounds (rather than small plots for nuclear families); It allows for building of temporary homes for the younger generation near to their parents’ homes until the wider issues of land ownership and planning can be solved; and it formalises a network of roads and paths that is acceptable to the residents.

This marks the first time that Bimkom or any social planner has been involved in the statutory planning process for a Negev Bedouin village.

This project, Promoting adequate planning and development of the recognized Bedouin villages in the Israeli Negev, was funded by the European Union. All content is the responsibility of Bimkom and does not reflect the views of the European Union.