The Bedouin village of Abu Tlul, situated approximately 10 kilometers from Beersheva, south of the road to Dimona, has a population of approximately 1,600. The residents of the village settled this site before the establishment of the State of Israel. Although the village is recognized, it has no infrastructure: there is no electricity, no running … read more 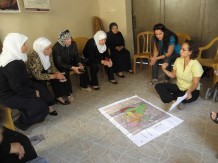 Bimkom implemented a workshop for women in East Jerusalem to empower them with the knowledge and tools to protect, promote and assert their rights to housing, adequate infrastructure and services. Together with the local organization Al-Maqdese, Bimkom developed a series of 12 informational sessions, with over 90 participants (all women) in total. The workshop has … read more

Located south of Ashkelon in the Negev, Sderot is a development town which originated as an immigrant camp in the early 1950s. The city  has a heterogeneous population of close to 22,000, which includes the second and third generations of the original families, as well as immigrants from the former Soviet Union and Ethiopia who arrived … read more

Or Akiva is a development town on the northern coastal plain, situated between Caesarea (Hof HaCarmel) and Binyamina. Established as a small settlement in 1951, it is now the second largest town in the area, with a population of about 20,000. Or Akiva is composed of five main neighborhoods, largely divided according to ethnic and … read more