In the petition, the Association for Civil Rights in Israel (ACRI) and Bimkom (Planners for Planning Rights) argue that the controversial outline plan – which was never passed into law, and severely restricts construction by Palestinians in east Jerusalem – is illegally being enforced. Read the artcle in the Jerusalem Post here 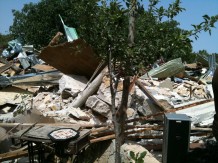 Dkaika (pop 400): In mid-November 2011, Bimkom and Rabbis for Human Rights filed a petition to the High Court of Justice, on behalf of the residents, against new demolition orders against Palestinian homes and agricultural buildings, and against the CA’s proposal to relocate the residents against their wishes and in contradiction to the court’s recommendations in … read more

Bimkom has been a partner in some 20 petitions to the High Court challenging the route of the Separation Barrier. In the majority of cases, our contribution to the struggle of the Palestinian communities affected by the Barrier lies in the provision of Expert Opinion Papers, planning information and data relating to the situation on … read more

Following a petition, in which Bimkom was intensely involved,  regarding demolition orders for two agricultural buildings in Bilin, the State notified the court that new regulations were approved for the licencing of agricultural buildings. Yet, the new regulations remain problematic. Bimkom will continue to promote permits and development based on a wider interpretation of the … read more

From 1997 to 2007, Israel’s CA (Civil Administration) transferred some of the Jahalin Bedouin, against their will, to a permanent site next to the Abu Dis landfill. The CA has since advanced the Jahalin “B” plan, which would transfer the remaining communities, some 2,300 people, to Abu Dis, with plans to put some of the … read more

National Outline plan 46 (NOP 46) is a plan for a detention center for those who enter Israel without approval of immigration authorities, mainly from Africa. The detention center is located in the Negev, near the Egyptian border.  The professed aim of NOP 46 is to deter Africans from entering Israel by conveying the message that future … read more