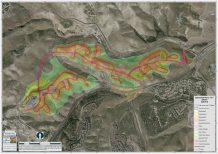 In February of 2020, Bimkom submitted objections to the Israeli Civil Administration against two detailed plans that aim to establish a new settlement in the area known as E1. The objection stated that it is a new independent settlement without any physical and functional connection and its aim is to connect Ma’ale Adumim to Jerusalem. Bimkom claimed that, since it will demand a forcible transfer of three Bedouin communities, approving the plan is a war crime under the 4th Geneva Convention. The planners and the authorities ignore the fact that the plans are covering these communities although they have been in exact same location for decades. Additionally, the plans will block the options of many communities in the area to use the land for grazing. Furthermore, Bimkom stated that there is no need to build the new settlement; especially not under the argument that it is needed for the natural growth of the settlement of Ma’ale Adumim because there are sufficient options within the existing plans of the settlement.

It is worth mentioning that the plans were not published in Arabic, which constitutes an unjust obstruction of access.

On October 2021, a hearing on the objections was held, and an additional hearing will be held on December 27th. Bimkom will continue to fight against discriminatory housing and building policies, against violation of human rights, and against forced transfer and demolitions of Palestinian communities.